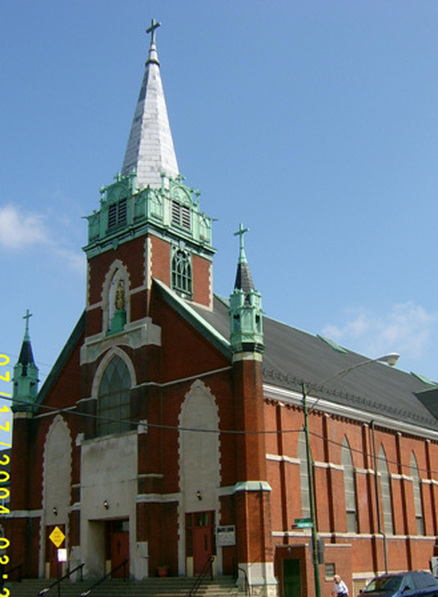 History of our Parish

In 1880 a group of French-speaking Canadians settled in the Brighton Park neighborhood where they wanted to have their own church. The first Archbishop of Chicago, Patrick A. Feehan, appointed Father Joseph LeSage to organize the first French-speaking parish in this neighborhood. This was how the community together with their pastor was building this temple in honor of Saint Joseph.

On June 7, 1891 Archbishop Patrick blessed the first stone of St. Joseph Church in Brighton Park, where Father LeSage was the first Pastor. Construction continued according to plans by the architects LaPointe and Hickok. The building took the French Provincial Gothic style.

In September 1891 Father LeSage invited the Sisters of St. Joseph of Concordia, Kansas to open the first school with 200 children. The first sisters of the foundation were: Sister Mary Avila as Superior, along with Sisters Fidelis, Columba, Jerome and Raphael.

The Church is dedicated to Saint Joseph in May 1892. The bells were purchased and consecrated on November 10, 1895 and blessed by Archbishop Feehan. The installation of the windows which are preserved until today begun in January 18, 1896.The company that designed these beautiful stained glass windows, Shroeders Lascelles, is the same that designed the windows of the Cathedral and the church of Notre Dame in Chicago.

On January 1900 Father Cyril A. Poissant was installed as the second pastor at the age of 34. He had a great devotion to Saint Anne and brought the first relic of the Saint from Monseigneur Marquis received from the Bishop of the Diocese of Nicolet, Quebec - Canada. With Archbishop Feehan’s permission was built to the left of the sanctuary the altar in honor of St. Anne. That’s how started the first novena in her honor in July 1900. Many pilgrims come every year during the novena to ask favors from which many have been granted by our beloved St. Anne, mother of the Blessed Virgin Mary and grandmother of our Lord Jesus Christ.

In January 1909, Father Joseph V. LaMarre was named the third pastor. He continued this great devotion in honor of Santa Anne organizing pilgrimages to her shrine. During his time as pastor was built the Church basement meeting rooms, renovated the rectory, school and the convent of the Sisters of St. Joseph.

It was this same priest who wrote to the priest in Apt the diocese of Avignon, France to obtain a new relic, since according to tradition it was here where St. Anne’s remains were discovered during the life of the Emperor Charlemagne. According to Christian tradition has it, the remains of St. Anne were brought from Jerusalem by Lazarus (whom Jesus raised the brother of Martha and Mary) after the resurrection of Jesus to ancient France due to frequent persecution of Christians in the first century..

Lenfant bishop of the diocese of Avignon, France, granted Father LaMarre’s request to have a relic of St. Anne. The Bishop gave this privilege because he heard of the great devotion to the Saint at the parish in Brighton in Chicago .

In April 1916 the relic was sent to Montreal, Canada at the Cathedral of Notre Dame, and Father LaMarre sent Father Peter Dufaul for it. The relic is a piece of bone of the body of Se. Anne. This relic is the largest after the one found in Beaupre Basilica - Quebec, Canada.

Father LaMarre was well loved by the whole community for his great love for the poor and his dedication to all people. He worked in this parish for 28 years.

Father Adhemar Savary is appointed as the fourth pastor on July 1, 1937, and in July 16, 1937 one day before St. Anne’s novena started, he became very ill and rushed to the hospital where he died on 3 October of that year. He served our parish for two weeks.

Father Louis F. DeCelle takes responsibility for the parish on October 22, 1937. He started remodeling the church, school, rectory, built the new sanctuary of St. Anne as preserved until today.

In May 1938 Father DeCelle begins the novena in honor of Our Lady of Sorrows acquiring for our parish the painting: "Our Mother in Sorrow" painted by J. Reynold Wellington in Paris, France where he received many awards and where it was exhibited in 1925.

In 1939 he established the societies of "Ladies of St. Anne", "Holy Name" and other groups to serve the community. On November 5, 1931 held the Golden Jubilee of our church celebrated by Bishop William D. O'Brian.

In January 1950, Father Lawrence Fitzpatrick is appointed and he finishes building the parish school and convent. In the summer of that year, the church suffered a fire, destroyed part of the choir where it was the organ. Father Lawrence began the restoration of the choir and the organ and installed the new main altar which is preserved until today.

In June 1959 the new pastor arrives, Father E. Lawrence Hews who continued internal and external restoration of the church building. Unfortunately, due to a heart attack, he died on October 28, 1961, taking over Father James V. Shannon. On April 25, 1966 another fire destroyed part of the facade of the church. Masses had to be celebrated in the school auditorium. Because of the fire the statues on the altar and the Stations of the Cross had to be remove for the damage they suffered. Father Shannon died on February 27, 1962.

Father Herbert J. Boesen would be the new pastor in 1962. During his tenure as pastor decreases the pilgrimage to St. Anne Novena, lowers the number of students attending school and the responsibility of the sisters goes entirely to the laity. Father Boesen dies in November 1975.

The new pastor, Father John F. Zock takes office in 1974. With him again revives the devotion to St. Anne attracting many young people and participation of new parish groups.

In 1982, Father Pierre J. Barr was assigned as pastor. During this time, he continued the restoration to celebrate the centenary of the Church of St. Joseph and St. Anne.  The centennial ended with a solemn Mass on November 5, 1989 presided by Bishop Alfred L. Abramowicz. In 1991 the churches of St. Joseph, Shrine of St. Anne is consolidated with the Church of St. Agnes forming the new parish of Our Lady of Fatima - Shrine of St. Anne.  Father Barr died on September 17, 2007.

In 1995 Father Anthony Englert was appointed Pastor. He and with the help of the community purchase the new electronic organ and the bells of the temple.

Father Marco Cardenas, CMF is appointed administrator in 2002. At this time the new restrooms were built and he continued with the Novena in honor of St. Anne.

In September 2005, assumed the post of parish priest, Father Nestor F. Sáenz. Since then he has renewed the roof of the church and the rectory. He has done restoration work at the school now under the administration of UNO. In April 2010, began raising funds for the general restoration of the church.

In December 2008 Father Saenz requested the presence of religious sisters from Central America. They arrived in December 2009 during the Novena of our Lady of Guadalupe. The church has two Franciscan Sisters of the Immaculate Conception of Comayague, Honduras. Sr. Margarita Ponce (perpetually professed) is responsible for parish groups. Sister Yesenia Saldarriaga (temporary vows) is responsible for the CCD program (parish catechesis).

In August a third Sister, Gloria Redondo arrived to work at Our Lady of Fatima to assist both Srs. Margarita and Yesenia. A fourth sister will arrive to work at Immaculate Conception parish on 44th and California.

With the help of God and our church members we hope to continue serving our community in this southern part of the city of Chicago.